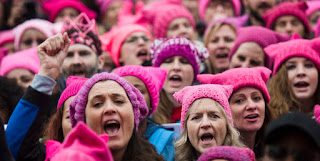 The other day on NPR's "Here and Now," there was a story about why so few Black women participated in the Women's March—a issue the host referred to as “intersectionality”—which is, I guess, how and where the multitude of issues and problems that need to be solved intersect.

(Yet another word to hate, but that’s a whole other post.)

I had been troubled by how few African-American women attended the Indianapolis event. It was obvious, looking at the photos, that the same was true of Washington and other cities. Reading a piece in the "New York Times" a while back about leaders of the March squabbling over inclusion, I thought, do we (meaning not only women) always have to argue about who’s in charge? I felt the same irritation upon learning it was the topic on “Here and Now.”

Then Ijeoma Oluo began to speak.

"I thought about [attending],” she said. “I gave it a lot of thought, and honestly, emotionally, it was really too hard. As the day became nearer, and I saw a lot of people who had never marched before, who had never marched with me before and with other people of color before, so excited to march for the first time, it became a really conflicting and emotional time, and it honestly wasn't something I could handle."

"It was wonderful to know that so many people were taking to the streets and were speaking out,” she said, “but if you are a person of color who has been fighting for black lives and brown lives, if you are a water protector who has been hosed down in Standing Rock, you have been begging people to stand next to you for so long. So, it can be hard to look at it and not wonder how many lives could be saved if we had even a tenth of these many people showing up at a Black Lives Matter march to push for police accountability and to push for reform. And that becomes hard because you can't bring people back from the beyond the grave."
She wondered what the turning point was for these women, wondered why it hadn’t been watching any number of videos of young black men being murdered by the police.
"Where were they then?" she asked.
Where, I wondered, was I?
At which point, suddenly, I saw the Women's March through her eyes: the sea of white faces, the pink hats, the clever, in-your-face signs, the air of celebration and self-congratulation.

Finally! Women were going to rule the world!

Before our group left for the Indianapolis March on Saturday morning, my daughter shared a handout from UNITEWOMEN.ORG. with tips for what to do if the demonstration went bad. “I really don’t think anything’s going to happen,” she said. “But just in case, you might want to take a photo of this.” We did. But I was pretty sure we wouldn’t be in danger, and I’m guessing none of the other women—and for that matter, none of the millions of women who marched all over the country that day—did, either.

Because most of us were white--and if we weren’t white, we were surrounded by a wall of white privilege. Privilege, in this case, being the knowledge that there was no way the police were going to mess with a bunch of white women, many of whom were pillars of the community.

This hit me so hard I wanted to cry.
“Oh, and about the hats,“ an African American friend of mine said, quietly, when I shared this story with her and told her how I felt. “My vagina isn’t pink.”
Oh, my god, I thought.
Everything, everything comes down to race in the end, whether it is intentional or an honest, if insensitive, mistake—and we are so completely nowhere on even confronting that problem, let alone solving it.
Can it even be solved?
Is a country whose grand experiment in democracy was built on the backs of black slaves and the genocide of its native people so skewed from the beginning that it can ever shed its sins and become a place where everyone is equal, everyone is free?
Not if we don't acknowledge those sins, acknowledge where they are still alive among us.
Not until all of us do everything we possibly can to see the world through the eyes of those who still suffer their lingering effects--and get a a small taste of what its like to be a Black person in this country.