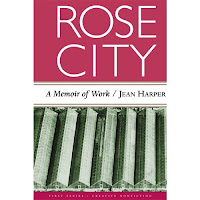 One of the cool things about my job as the Executive Director of the Writers' Center of Indiana is promoting the work of fabulous Indiana writers. I know a lot of them, which is one of my life's great pleasures. But I'm always discovering new ones--and Jean Harper, who lives and writes in Richmond, Indiana, is one of them. Rose City: A Memoir of Work was published by Mid-List Press in 2005.

Harper went to work as a rose cutter when she moved from her East Coast home Richmond, Indiana to be with a former professor whom she had loved since she was a student at Earlham College. She’s married; he’s married. It’s a difficult time. Harper risks everything for love and love is at the center of Rose City, but this memoir is not a love story. It’s the story of a smart, talented, well-educated woman in her thirties, who takes the only job available to her in this small college town, cutting roses, and whose co-workers accept her, teach her, and help her find her way into a new life. It’s about the rose industry, about roses. It’s about a once prosperous Midwestern town dying as new labor policies of the 1990’s lure American companies to countries where workers are unprotected and drastically greater profits can be made.

“All of it was foreign to me,” Harper writes early in the book. “I was an American, living and working in my own country, but it didn’t feel that way. I had crossed a border. I could have used a passport and a visa, entry stamped JUN 27 1992. RICHMOND, INDIANA, THE ROSE CITY.”

Thia world, which Harper so beautifully created on the page didn’t seem foreign to me at all. I grew up in the Calumet Region in the fifties, in a working class family that struggled to make ends meet—a world I left behind as soon as I could, but which, as time goes by, I realize shaped the strongest parts of me. I recognized Lil, Joy, Sammie Jo, Eddie, Bo, and Hank. They lived in my neighborhood in a different place, a different time, and so I know how well Harper captured the poignant mix of grace and resignation which they faced each day, the deep sense of responsibility they felt toward family and friends, the hope that sustained them even as the world seemed determined to drag them down.

I loved everything about Rose City: the story of this group of workers, which read like a novel; the social commentary about company practices with chemicals that put everyone in danger folded into their concerns about pregnant 17 year-old Sammie Jo; lush, lyrical forays into the world of roses; the deft characterization of Richmond, with its assortment of working class people and academics. The raw honesty with which Harper explored the disappointments and failures in her life that she knew she must face to be able to find happiness pretty much blew me away.

“The greenhouse saved me from an ordinary life,” she writes near the end of the book.

Having read Rose City, it’s hard for me to imagine that Jean Harper is a person capable of being ordinary. In any case, I’m glad she found work in the greenhouse and very glad she wrote this book about it.

Jean Harper grew up in Concord, Massachusetts. She earned her B.A. from Earlham College and her M.F.A. from Emerson College. Her short fiction, essays, and memoir have been published in The Iowa Review, Living Forge Journal, and Cimarron Review, among others. She is an assistant professor of English at Indiana University East and lives in Richmond, Indiana.
Posted by Barbara Shoup at 7:26 AM